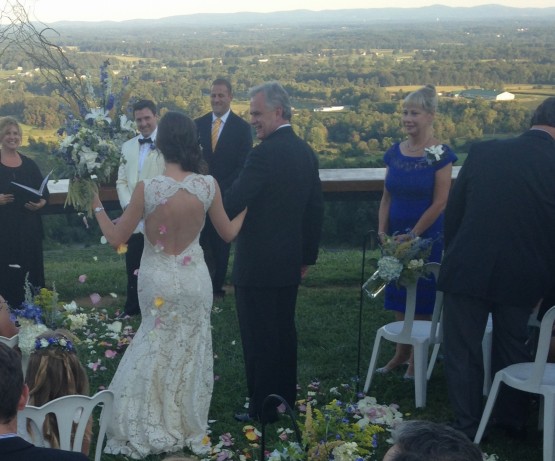 It’s as if Mother Nature personally condoned the union. At the Curry-Kelly wedding at Bluemont Vineyard, Washingtonians were spared the sultry August heat. It was dry and crisp. Not a mosquito in sight. And best of all, the sunset gave way to a sky so dark, guests admired the milky way, stretched across the heavens.

The wedding took place on the foothills overlooking land that Jackie Kennedy used to ride through on horseback, both as a child and during her White House years. Leesburg is Virginia’s “horse country” – but as wineries expand in the area, some refer to it as “wine country.” After all, Virginia is the fifth highest state for wine-producing. 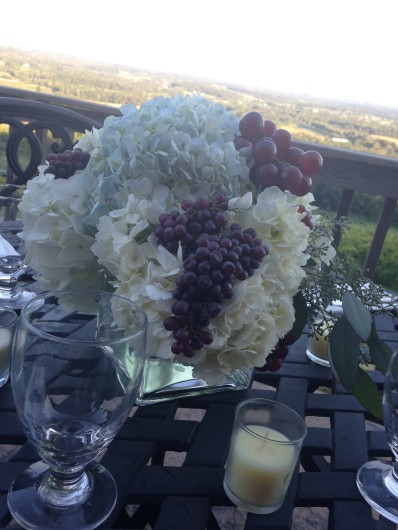 The marriage of Gerald Curry, (an Intel professional) and Jennifer Kelly (a real estate agent), was more than a joining of husband and wife. It was a ceremony to celebrate the modern, blended family. A Brady Bunch with better hair. In addition to exchanging rings, the couple gave matching necklaces to the three daughters they have between them. Guests smiled on as three young girls shrieked with the excitement of officially becoming sisters.

The bride wore a stunning open-backed dress that broke records for the most photos taken of a bride without her face in it. Indigo and blues were woven throughout the theme, between the sashes on the flower girl dresses to the figs on the wedding cake. Even the engagement ring was blue – a nod to Princess Di’s ring handed down to Kate Middleton.

The open bar at the rustic venue was in full swing even before the outdoor ceremony began. By the time the bride sashayed down the aisle, (and sashay she did – she even did a little dance) guests hollered and cheered. It was an elegant wedding that still found a way to thumb its nose at convention. 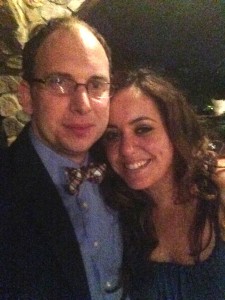 Congratulations to the happy couple!

2 thoughts on “A Wedding in Virginia Wine Country”

More than just horsing around