Whenever I think of Ireland, I think of road trips through the rolling countryside that come to a halt when a flock of sheep decide to congregate in the road. I wanted that classic film moment to happen to me; it’s so romantic. The closest we got was a confused goat crossing the street in a village.

The people in Ireland are so kind, I was suspicious of them at first. They’re always smiling and going out of their way to make your day better, even if you never asked them to. One night Robert and I stood on a bridge in Limerick, admiring the hundreds of wild swans that gathered on the water. In the U.S., parks will buy two or three swans for show in a man-made pond and call it a day. In Ireland there were swarms of them. It was late evening as we huddled on the bridge, when a man started walking toward us. We tensed up and wondered what he wanted from us. When he got closer, we saw that he was smiling broadly. He saw that we loved the swans and advised us on where to go during the day to feed them stale bread. 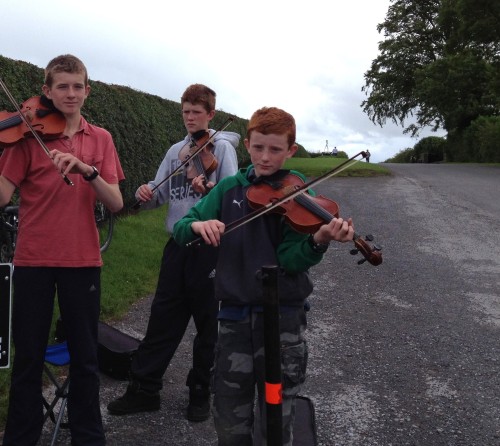 Another time, a parking lot attendant let us exit without paying in full, due to some confusion I can’t recall. Before we pulled away, he smiled at us and said, “I always wanted to go to America to see those tornadoes, and be a storm-chaser!”

Ireland was full of charming villages, ancient ruins on the side of the road for people to explore, neon shades of Kelly green, and hearty Irish breakfasts that called for blood sausage. They changed the name to “black sausage” to make it more appealing to foreigners, I believe.

We’ll be coming back.