Sometimes those who appear to be les bon vivants are anything but. Brenda Diana Duff Frazier was coined a “poor little rich girl” by the press, which is more of a judgement than a label. To be fair to the haters, she rose to prominence in the 1930s, when people were still reeling from the stock market crash of 1929. Her family was unaffected by the unfortunate event, and her debutante ball in 1938 had an attendance of 2,000. That party alone landed her on the cover of Life magazine.

Usually the cover of this magazine is graced by scientists, politicians, artists. She landed the cover just for being a “celebutante.” If this harkens back to criticism of the Kardashians, who were famous for nothing, Brenda Frazier was the O.G. But unlike the Kardashians, she wasn’t a social climber who calculated her moves with the intent of “being seen.” She was thrust in the spotlight by her parents, and partially by society, desperate for the escapism of glamour during their own hard times. 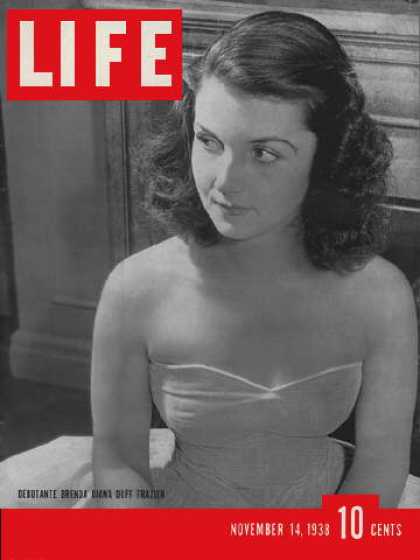 While studying in Munich with her grandmother, Frazier begged her parents to allow her to finish her studies. But her parents were two alcoholics embroiled in a self-serving custody battle. Though they’d already subjected her to an unstable childhood rife with neglect, they dragged her back to the U.S. and ended her formal education when she was just 15.

Though her debutante ball was covered by the press as a glamorous event, she was suffering from the flu at the time, had swollen feet and collapsed from exhaustion in the wee hours of the morning.

She was once booed off a Broadway stage, when being presented with other artists. But rather than offense, she conceded that her detractors were right to do so. She understood was famous for nothing.

Not surprisingly, she suffered from anorexia and bulimia in order to keep up with her “Glamour Girl” status in the press. Years of holding her neck a certain way (so not to mess up her hair) caused neck problems. Her love life wasn’t a fairy tale either, with multiple divorces. Later in life, she became reclusive and addicted to pills. Diane Arbus captured the below photo of her. Her faced powdered with the signature “white face” look (pale face, red lips, coiffed hair) she was famous for. She was emaciated in bed and smoking a cigarette.

It used to be that everyone wanted the American Dream. The focus was on upward mobility through hard work. When that wasn’t enough, everyone wanted to be rich. Not content with that, now it seems everyone is clawing for fame. Perhaps the story of Brenda Diana Duff Frazier is a sobering reminder of the darkness that can lurk behind a glittering celebrity.